You are here: Home / Gardening / My Backyard chickens / Story of Love, Loss and Family Memories

Our Silkie rooster Al Capone had two beautiful hens that were always by his side.

That was until a Red Tail Hawk decided to kill them both.  After the first death, we partially cover the top of the chickens run with bird netting hoping to deter the assassin.

That was until one Saturday I went out mid-afternoon to do an egg pick-up only to stumble upon a murder taking place.  It was not a pretty sight.  I went after the hawk and the hawk easily escaped through the opening over the run.  I was heartbroken and feeling pretty guilty for my stubbornness to not cover the entire run.  I didn’t like the way that the netting had looked and had decided to run fishing line in a grid pattern over the remaining half hoping that it would be enough to prevent the hawk from entering.  I couldn’t have been more wrong.

We watched as Al become more and more depressed.  Though he was a small guy he took his role as a caregiver of his girls pretty seriously.  If he found a morsel in the grass he would always do a little call to his girls and show them where it was.  Quietly going without, so they did not.  A real gentleman you might say!

We watched with broken hearts at his obvious mourning.  He was always in the corner of the run by himself and would be the last one in the coop at night.

My husband kept encouraging me to find him another Silkie girlfriend.

I had been checking on the Internet and asking around to a few people I know who have chickens, I even called the local hatchery to see if they would have a hen to sell.  No luck.

Then I hit pay dirt and an ad popped up offering Silkies and Blue Marans.  I was doubly thrilled because I had wanted to get Blue Marans and our Hatchery does not sell them.  Blue Marans are nice looking chickens, but people want them mostly for the mahogany colored eggs that they lay which are beautiful. 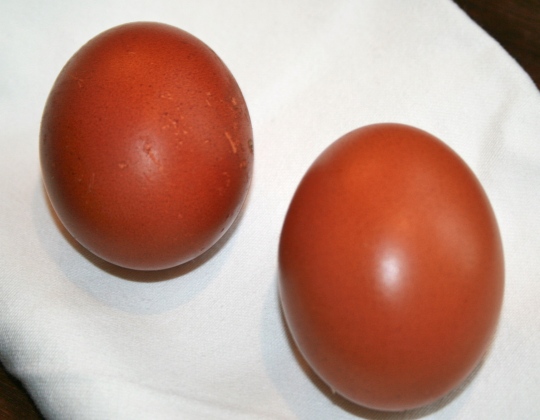 I did some emailing with the gentlemen who had the hens for sale and we agreed that I would take a single Silkie hen and two Blue Maran hens.  I set up the time and then because it was an hour drive to the seller’s farm I convinced my hubby, to drive out with me on Sunday. (Such a good guy)   We arrived at the Farmers home and a very gruff elderly man came out of his house and pointed to a barn that sat off to the side.  He would “meet us over there,gray,” he said and walked away.

We drove over to the barn and waited for him to make his way over.  He directed us around back where he had dog pens filled with different silkie chicken colors, black, and white.  We stopped in front of the white Silkies and he informed me as I went into the pen to pick my hen, that for any hen I took I would have to take a rooster.  WHAT!  He had told me in our emails that I could just buy a hen.  I had asked because I already have two roosters that I acquired the same way.  I pleaded my case.

I tried, tried, tried to charm him into letting me go without a rooster and let me just say I can be pretty charming.  NO luck!  I don’t even think he knew what charm was.  My hubby said, “just take him we will find him a home, but if we take a rooster we now want two hens.” “Fine” said Mr. Friendly Farmer like he was making a big concession.  I wasn’t buying it.

What did my husband mean by “we” would be finding him a home, he meant I would find him a home.  Which is obviously not easy to do considering I now have three roosters.  F*A*N*T*A*S*T*I*C (I said to myself with loads of sarcasm).

Our Silkies chosen, boxed up and put in the back of our SUV, I reminded “Mr. Friendly Farmer” that I also wanted Blue Marans.  “Fine he grunts, drive down the street to that barn over there on the left” and he informed me just as I opened the door to slide my tush onto the seat, “You take a hen, you get a rooster”.

O-lordy-be I wanted to reach out and smack him a good one!

My poor hubby had to hear me grumblin’ and gripin’ and bit—-‘ the whole over to the other barn.  You know he was thinking “why do I let her talk me into these things?”  among other things.

We drive little ways down the street to a second makeshift barn for the Blue Marans.  We pulled up to this barn; if that’s what you can call it, and through a small 2′ x 2′ opening which I think was a makeshift window we could see a pack of roosters, yes I said pack, a big pack, there had to be 20 roosters that were HUGE giving us the stink eye.  Now I know that is not really possible that 20 roosters were looking through a hole that size, but if felt like they were and I started to hear creepy slasher music playing in the back of my head and Vincent Price laughing.

I said to my hubby, “look how huge those things are”, and he said “yea, and you get to take one home”, “no way” I said.  He just looked at me with his ” you can’t be that dumb look” (he knows better than to say it out loud) then asked with the look of astonishment on my face,”why do you think he made us drive here.”  Well, I wasn’t thinking straight I was still distracted from Vincent Prices’ laughter, give a girl a break.

Mr. Friendly Farmer pulled his pickup next to our car told us to “wait out here” and he then entered the barn through some hidden back door.  We stood by the 2″ opening both stunned silent as we watched the herd of roosters running around a room about 10 ‘ x 10′ square with no windows except the one that we stood looking through.  The farmer was obviously in a back room as we listened to a lot of feathers ruffling, chickens screaming and noises I had never heard before.  Eventually, Mr. Friendly Farmer  came walking out of the recesses of the back of the barn into the room with the roosters carrying two hens hanging upside down by their feet from his hand.  I stood there dumbstruck by the whole situation, so Jim took over quickly pointing out the roster he wanted and he and Mr. Friendly Farmer started putting our new additions in their travel box.  I was so flustered he just shoved me in the car, shut the door and jumped in the driver seat and we high-tailed it out of there.  Leaving the o- so not Mr. Friendly Farmer in the rear view mirror.

Now on our way home with the new additions, I had an hour to find a home for the new roosters.  I decided to drop our Big Maran Rooster at a local petting zoo down the street from us that has goats, chickens, ducks and a turkey.  I would worry about the little silkie rooster later.  Needless to say, I was still shaking off the effects from where we had just left.

We made a successful drop of the big rooster at the zoo and headed home to introduce our new hen and silkie rooster to the rest of the brood and hope that Al Capone would be excited with his new ladies.

All was going well until a few hours later we received a call from the zoo owner saying our rooster had escaped and they couldn’t catch him.  My son Jacob and I headed down to the little zoo figuring we would easily catch the big guy.

We couldn’t have been more wrong!  When we arrived a few guys that worked at the zoo gave up a few minutes after we arrived and left us to our own devices.  We spent about an hour almost catching him, only to miss him inch after inch.

After the hour, I was pretty fed up and suggested we give up and head home.  Jacob would have none of it.  He knew that chances were good that the big guy would not make it through the night with the raccoons and coyotes we have around our neck of the woods.  So, I headed home to grab our pool net in hopes that with a net we would be able to snag him while Jacob stayed and kept an eye on the big guy.

Once I was back at the zoo Jacob had herded the rooster into the woods against an old farm fence, that was falling down over itself. We worked as a team, a few I go left with the net, you go right with your sweatshirt held up like a shield (don’t ask, we were desperate) we both made a heroic lunge with a last-ditch effort and bam Jacob snagged him in his sweatshirt mid-jump.  We both were lying on our bellies, filthy dirty looking each other in the eye with one exhausted rooster wrapped up in Jacobs sweatshirt.

After a beat of exhausted silence, we both started to laugh after I caught my breath,  I looked at him and said : “you are going to remember this for the rest of your life aren’t you!”  He said “yep, and you have a bunch of sticks in your hair”  NICE!!

Ahhhh a bonding moment caused from the love loss of one Al Capone and a Big Dumb Blue Maran Rooster!

But of course – now I have four roosters!

He is actually pretty sweet. 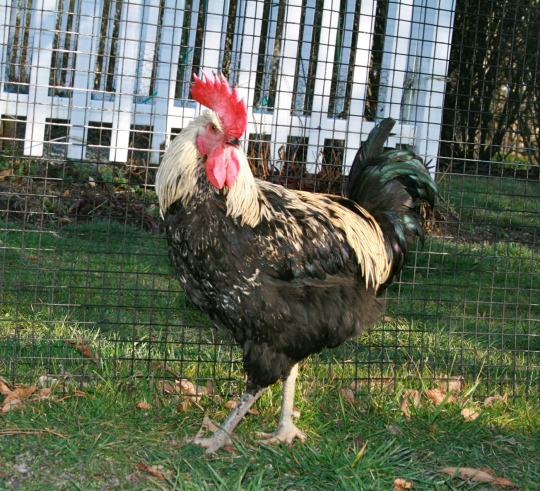