Skip to content
Home » Gardening » Why Do Roosters Crow?

Roosters crow every day, and the sound is iconic. It’s used throughout pop culture to symbolize the start of the morning. We’ve all heard “cock-a-doodle-doo” a million times, whether from an actual rooster, or from a TV show or movie.

Most people assume that roosters crow to announce the start of the day. That’s certainly the stereotypical image of a rooster. But that’s not actually why they crow. In reality, roosters crowing is a lot more complex than that.

Here’s everything you need to know about crowing roosters.

When Do Roosters Crow?

We all associate a cock-a-doodle-doo with the sun starting to come up. But in reality, roosters crow all throughout the day, not just first thing in the morning. It’s more noticeable when it happens early in the morning, because it might wake us up (or, let’s be honest, annoy us!). But even after those early morning crows, roosters will keep crowing … you’re just less likely to notice it once you’re fully awake, and other noises from the day are filling the air.

With that said, roosters do reliably crow early in the morning. Their internal clock is 23.8 hours long, which results in them feeling the need to crow right before the sun comes up.

Why Do Roosters Crow?

There are tons of different reasons that roosters crow … and that’s just counting the ones we know of! There are probably a lot of reasons that we don’t know about, too. Here are the main reasons why your roosters might be crowing.

Assert Dominance and Mark Their Territory

Chickens might not be the most intimidating animals, but like most creatures they can be territorial, and that’s especially true of the roosters. Roosters will often crow to mark their territory, and make sure that other roosters know it’s their land. If you have multiple roosters, one might crow to assert its dominance over the others.

On a similar note…

When multiple roosters share the same space, they’ll naturally develop a hierarchy. Once this happens, they’ll usually crow in order of importance. The rooster at the top of the hierarchy will crow for whatever reason, and then the rooster second from the top will crow, and so on and so forth until all of the roosters have made noise. Once the rooster at the bottom of the totem pole has crowed, the first rooster will usually crow again, as if to remind the other roosters that he’s the top dog.

The rooster hierarchy is why you’ll often hear a lot of cock-a-doodle-doos in a row.

Chickens are an animal that is preyed on, so they’re often on full alert, and keeping an eye out for danger. If a rooster senses some danger, they’ll usually crow to warn the rest of their flock. Sometimes the danger is legitimate, but a person or car approaching a flock of chickens can scare a rooster enough to make him crow.

Like so many other species, chickens have some notable mating rituals. Namely, the roosters will often crow to try and attract hens. So if you hear a rooster crowing it might mean that it’s morning, or that there’s danger … or it might just be some good old fashioned flirting!

Roosters also have a little bit of kiss-and-tell in them, because often they’ll crow after mating, too! And sometimes roosters crow after a hen lays an egg, though it’s not entirely clear why they do that.

Now that we’ve covered the why of roosters crowing, let’s talk about some interesting facts about those cock-a-doodle-doos!

How to Limit Roosters Crowing 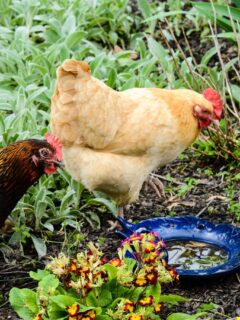 18 comments on “Why Do Roosters Crow?”